I've been wanting to get Aurora some playsilks for months now (since just before her birthday) but couldn't justify the cost of buying them from someone despite how much I knew she'd love them - I thought about buying fabric to make some but the thought of hemming them all put me off. A blogger I follow reminded me that I could do it myself by posting about her homemade playsilks.

Dharma trading to the rescue with undyed silks and silk hankies and I got to use some of my enormous kool-aid stash. 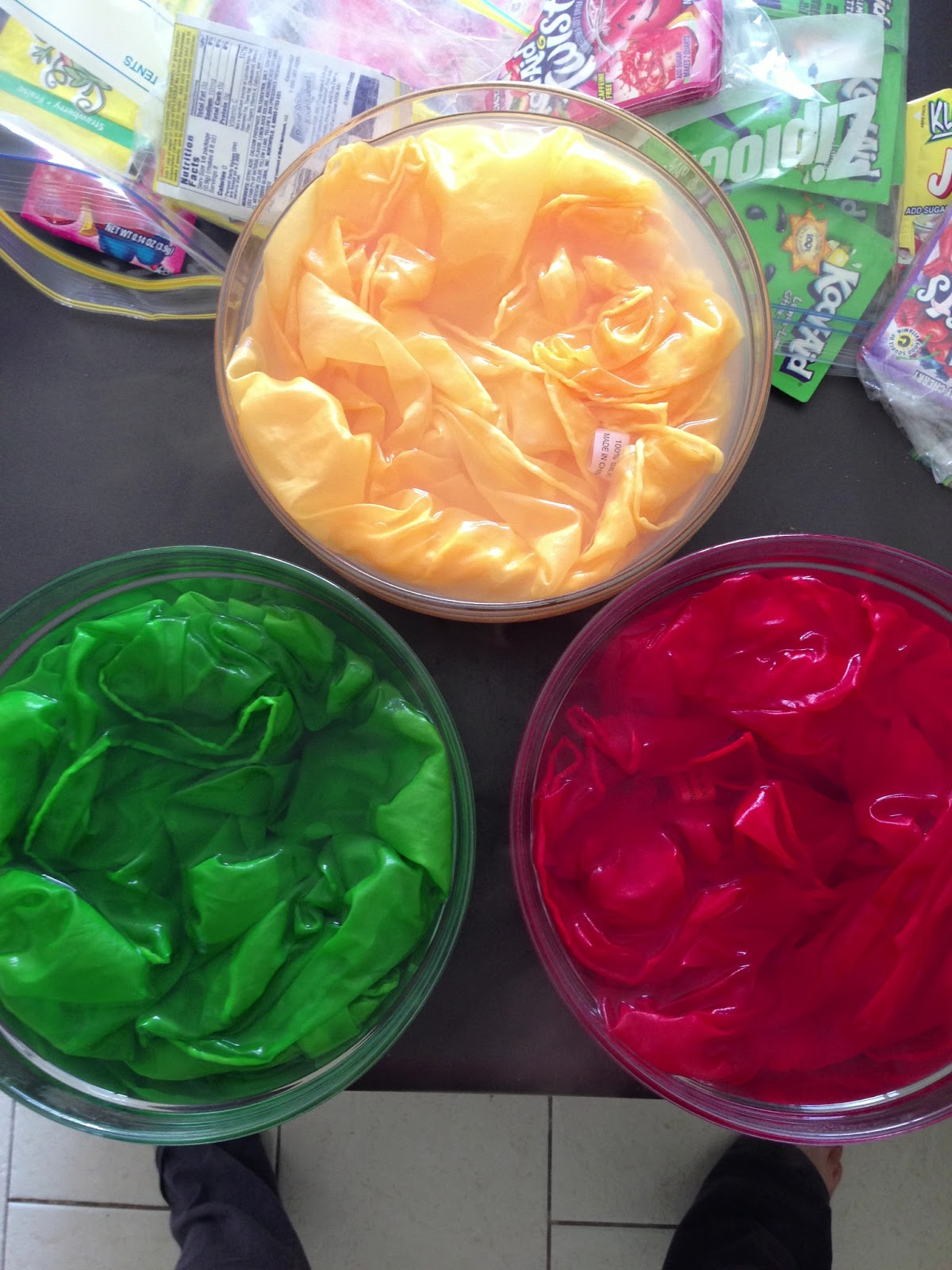 I thought about having Aurora help me but because of the boiling water I decided that I'd surprise her with them after a nap.

I had a lot of fun doing this and I'd love to get more. I have a ridiculous stash of kool-aid and it would be fun to use some of the colours I didn't get a chance to use this time.
They've gone through the wash once (cold water and handwash cycle) and besides one colour not being quite set and running a bit (damn), the colours are still just as bright.
The kids at MG love them too. 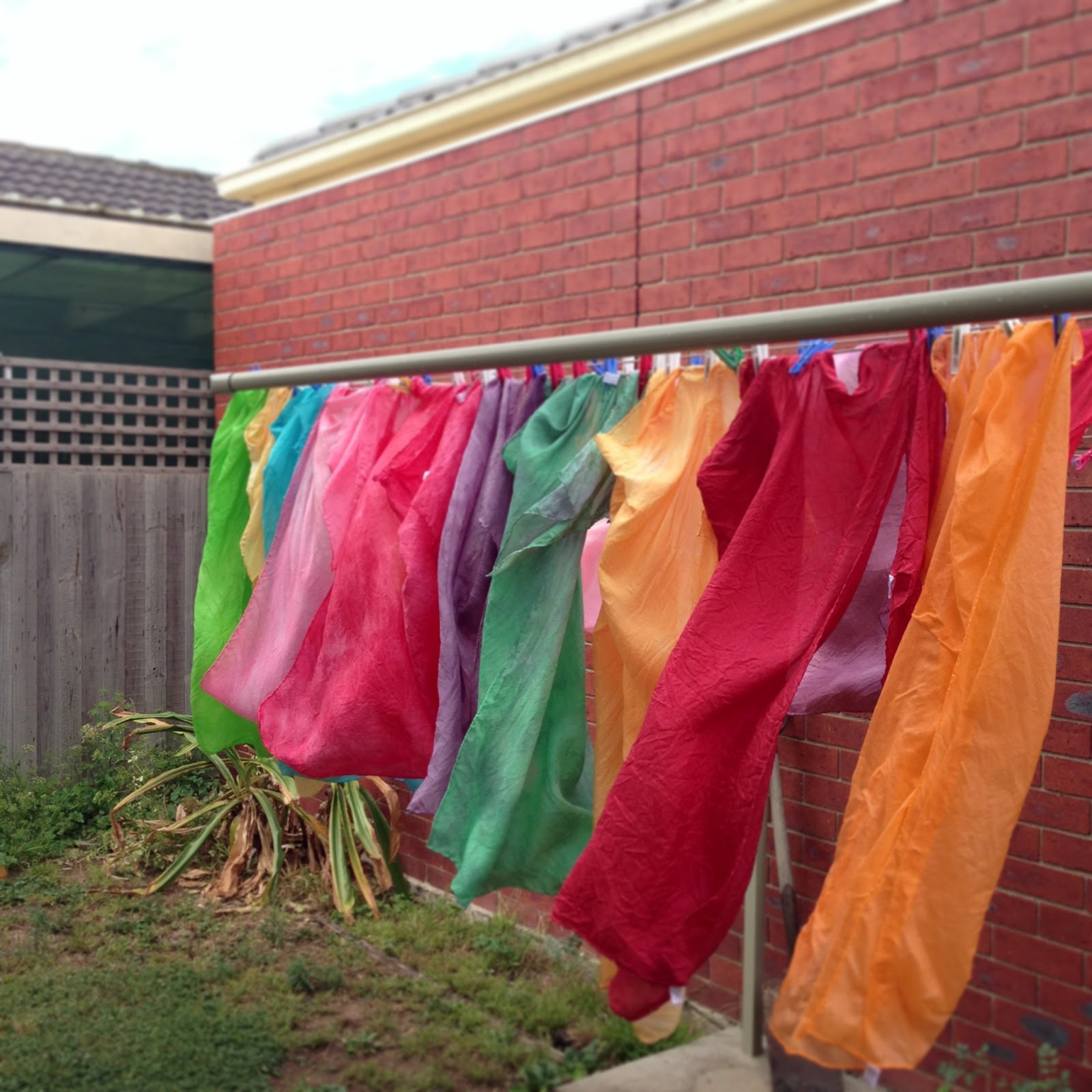 A bit of woodwork!

I've had this pattern for a helping tower bookmarked for ages. It seem like the perfect thing to have in the kitchen - especially when just pulling up a chair isn't possible or practical. Before we built one of these things we did try the chair route but our chairs have a slight slope backwards that was always putting Aurora off balance. We also have a gate up across the kitchen so dragging chairs in was always a but of a hassle.

We ran into a few hiccups with imperial vs metric lumber sizes but managed to find what we needed and I asked if my FIL would be able to help with the sawing and tool using side of things.

My FIL cut all the pieces (minus the arches and curved support bits) the day before and then I went over around midday and we got to work. It took about 8ish hours to get it all built but I'm sure someone with more woodworking experience would be able to get it done quicker (unbeknownst to me FIL had never done any sort of woodworking before).

The next day I set to work filling holes and sanding everything and then put a few coats of primer on before putting the colour on.

Much of the same

It feels like we've been playing catch-up since my last post and I wish I could rewind time for a chance to slow things down and get things done. (I haven't even sent out my Christmas cards... eek!)

I did a little bit of working over Christmas taking Santa photos. Even though you can get some trying customers, I really enjoy it (this is the second year I've done it).
We had our usual busy Christmas, opening presents here with Grandma on skype, off to SIL's quickly to give presents then to MIL/FIL's for lunch and then off to visit some extended family for dinner. I'm always amazed at how many people are on the roads on Christmas day. It's a really common thing for people to visit multiple family members on the big day (it's like everyone tries to cram visiting every single family member in on one day) so there's a typical rush in the morning, just before/after lunch and just before/after dinner. Despite all the rushing around and driving, we had a great day. 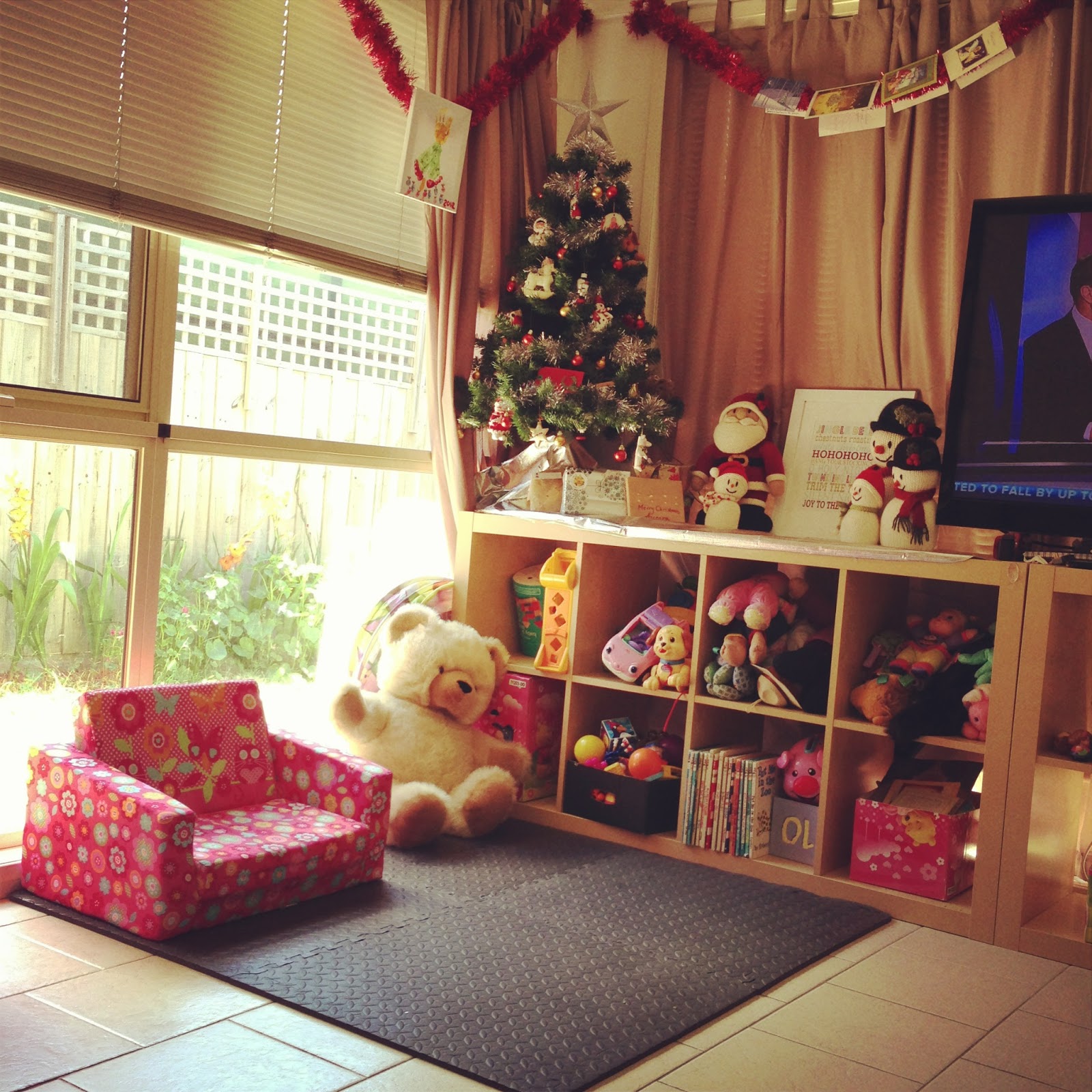 The garden has hit it's peak and is now on the way down. We've gotten a few dozen grape and cherry sized tomatoes off our little plant and we'll get about a dozen regular sized tomatoes off our other bushes. They've struggled quite a bit with the heat - especially since our nights haven't been cooling off at all. I managed to get one very pathetic looking carrot and hopefully we'll be harvesting some corn in a few weeks. 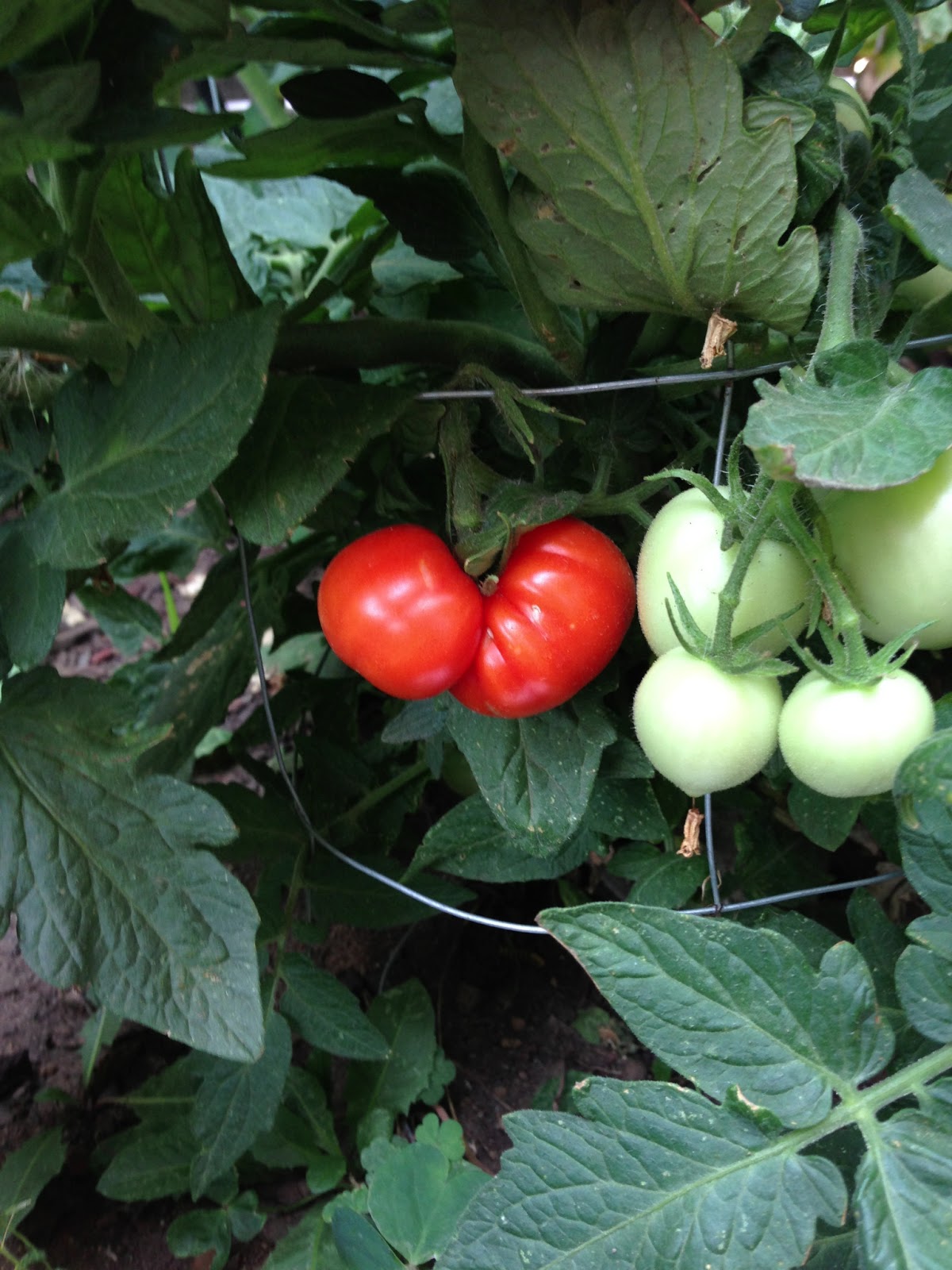 My flowers have definitely hit their peak, I need to get out there and clean things up a bit. I was at the store yesterday and all the spring bulbs are out! So excited! I bought some tulip bulbs (my favourite) and I'll pick up a few other things, it seems like I have way better luck with bulbs than I do seeds. I might pick up a few big pots for out front to put bulbs in. 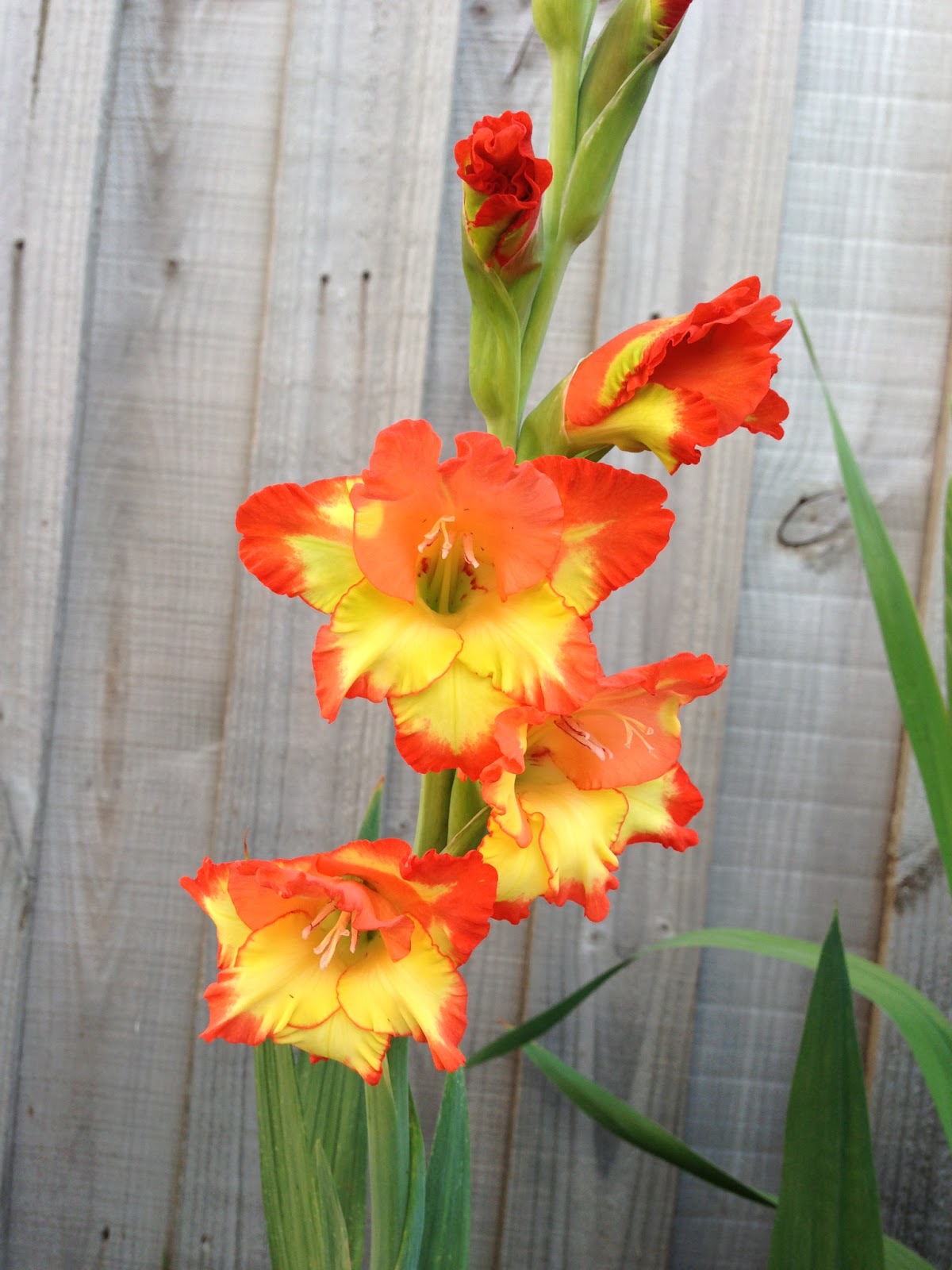 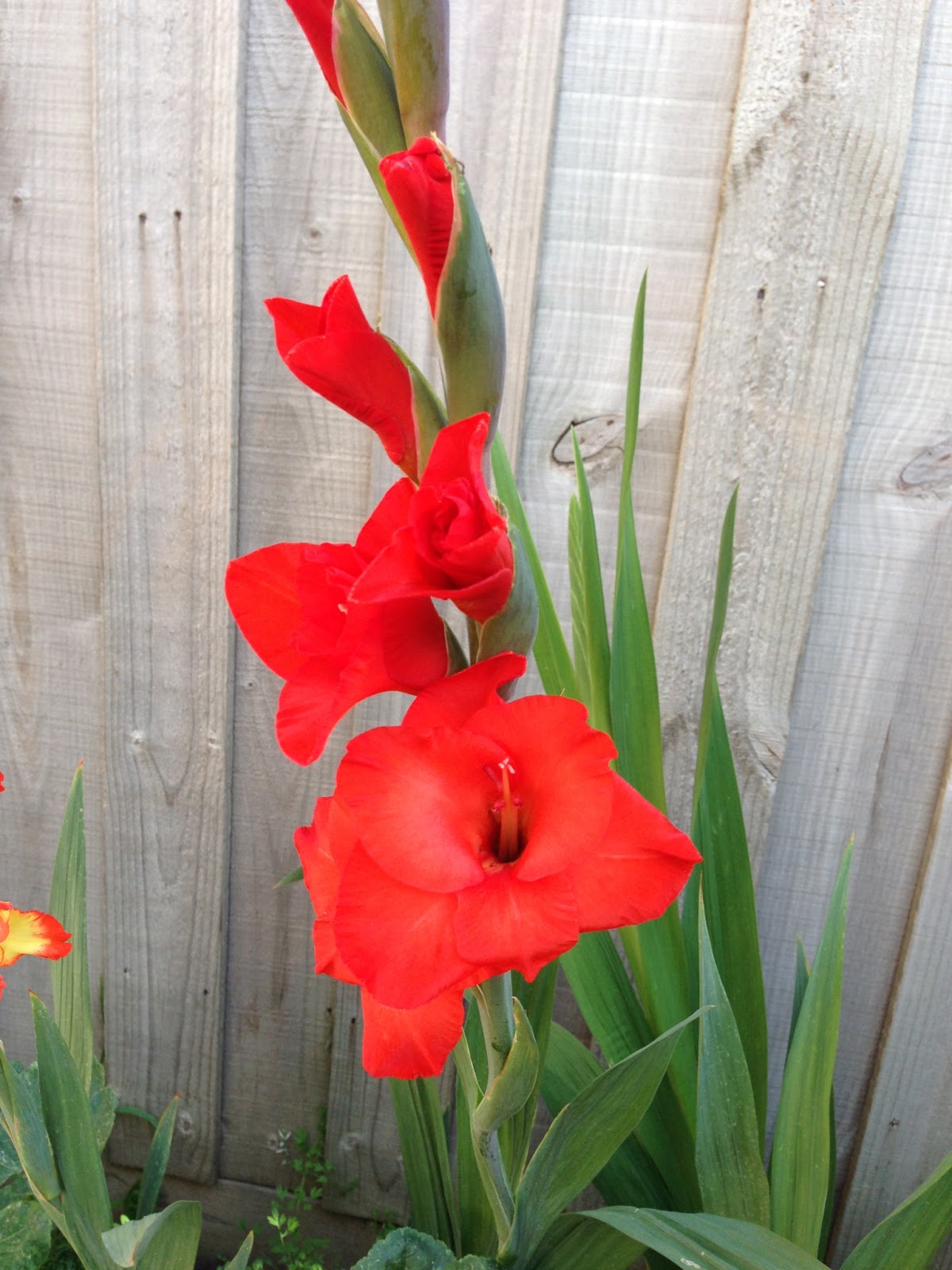 Other than that, there's been a few crafty projects which I might save for other posts and of course the regular baby wrangling. Except I think I need to start calling her a toddler now! Things have been trucking along in the garden department. I've pulled up all the radishes and planted  more (for some reason most of them grew weird and crooked/spindly), planted more carrots (only one is growing?!) and planted my brussels sprouts. On the first day of summer (Dec. 1st) one of my glads bloomed and currently there are three others about to bloom with a few other set to bloom next week. I'm waiting to see if the mess of green in the flower bed is actually flowers or just weeds that I should pull up, I'm starting to think it's mostly weeds! Hopefully they'll start to do something soon! 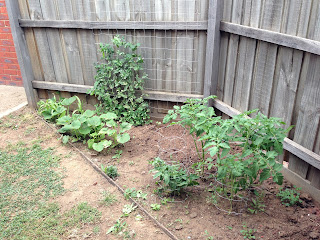 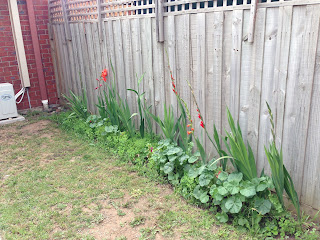 My tomato plants are starting to get flowers so I'm really looking forward to eventually getting tomatoes and my pumpkin plant has really taken off. Hopefully some of the seeds I planted a few weeks ago actually start growing! I seem to have had the most success with planting things in small pots and then transplanting rather than planting seeds straight into the ground!
Posted by Megan at 4:29 PM No comments:

On Fridays Aurora and I go to rhyme time at the local library and most of the time two of the girls from MG come along. To make it worth the drive for them we try to go for a bit of a walk and we usually always have lunch (there is an awesome chicken shop in the shops by the library). This week we decided to do some Christmas crafts as well.
I whipped up some corn starch dough using this recipe. I made six batches of white, three batches of red and two batches of green (I coloured the dough with Wilton's Icing Gels - the red took a lot of dye, one small pot of Christmas Red, No-taste red and about a quarter of a pot of burgundy, the green was one pot of kelly green). 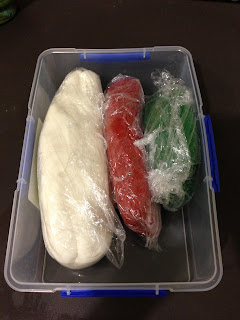 There are a few reasons I chose to do corn starch rather than the traditional salt dough and one of them was that these corn flour ornaments were VERY white, a lot of the salt dough ornaments I've seen are sort of yellow-y. Another was that I happened to have corn starch and baking soda on hand (I later went to the store for more to make my mega batches) and another was that I get baker's eczema from flour and even though it's not that bad, I try to avoid it when I can.

After our lunch we got to work kneading and rolling out the dough. We decided to do our white ornaments first then our green and then our red to avoid colour mixing. The dough kneaded up beautifully and was very smooth. 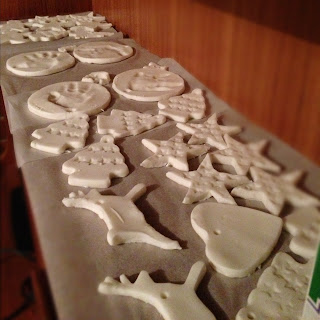 We made a little over two dozen white ornaments, and a little over one dozen each of the red and green before the girls had to go. 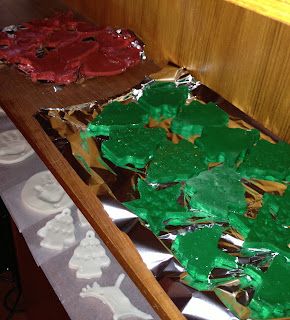 After the girls left I made a few of my own ornaments. Aurora was asleep while they were here so I didn't get to do her hand print ornaments earlier in the day. The girls also left me their cookie cutters to use so I decided to cut out some letters. No idea what I'll do with them (glue them onto a plaque?) but they might make cute Christmas presents. 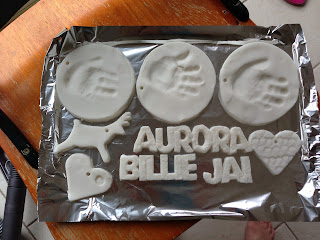 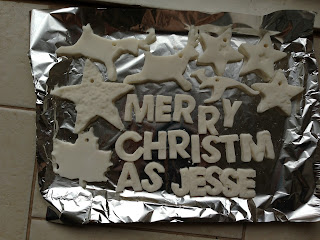 It's been almost three months and I've finally got a few flowers blooming or ready to bloom!

I have a few flowers on a few of my balsam camellia plants and one of my glads is ready to bloom. 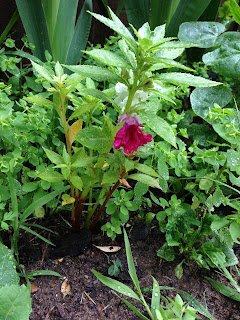 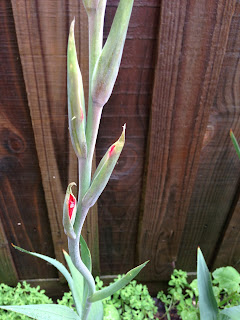 The only problem I have right now is I have a total infestation of leafhoppers. There are certain plants they leave alone but they LOVE flowers (they've eaten three of my pumpkin flowers and are working on the balsam camellia now). Now that I've finally ID'd what they are (at first I thought they were slugs/snails and then aphids) I can hopefully figure out how to get rid of them. Unfortunately I haven't seen any beneficial bugs in the garden which is probably why there is such a big infestation.

I can't wait until I have more flowers blooming (and when I can see what of the mass of green in the flower bed is flower and what is weed!).
Posted by Megan at 10:00 AM No comments:

Proof that I knit!

I've been trying to write this post for a week or so now and keep getting interrupted! I've picked up a few shifts at Glen's work doing Santa photos so we've had a busy few days.

This doll feels like a long time coming! I started knitting it in September to have ready for Aurora's birthday and just when I was nearly finished I got hand, foot, and mouth and couldn't knit (it was SO painful!). I always have a billion projects I want to make at the same time but decided that before I started something new I had to get this doll finished. I poured over my Jean Greenhowe pattern books to find a doll I wanted to make. I've already made a few and wanted to make one I haven't made before (since Aurora will eventually get the others I've made). I decided to modify one of the patterns in the book since it was the right sized doll and I could just add/not make other bits. I used the Robin Hood pattern for the body and the Cinderella pattern for the hair and then just added my own skirt (I made the Robin Hood skirt but without the belt it just wasn't looking right). 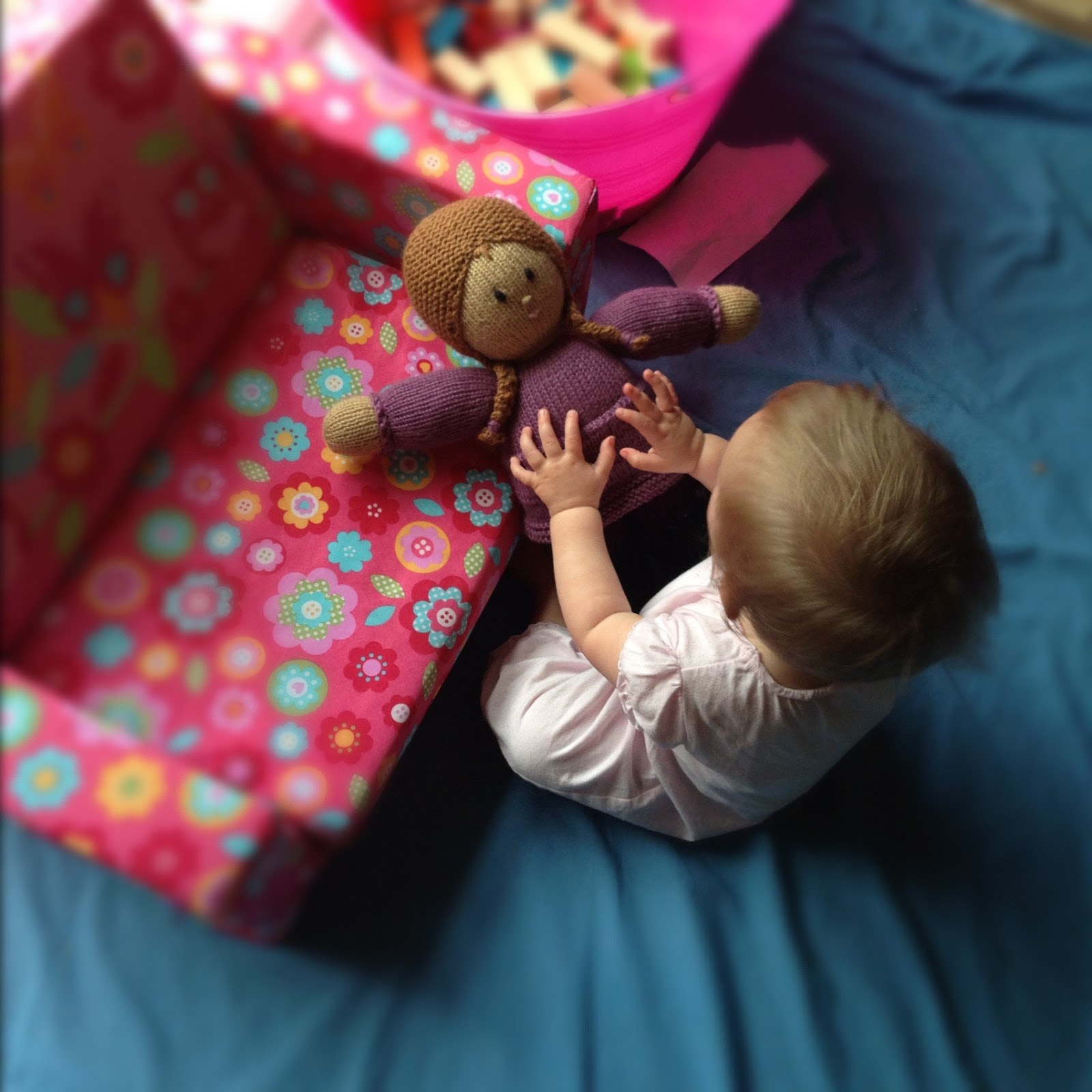 Overall I think it turned out well even though there was some fiddling and re-knitting of some bits (the main hair piece was waaaaaaaay too small the first time I made it). Now to decide if I want to make a small doll for Aurora for Christmas!
Posted by Megan at 9:53 AM No comments:

Megan
I'm a Canadian that spent 6½ years living in Arctic Canada (200km North of the Arctic Circle). This is my blog about my life and adventures in Australia. You can read about my Arctic adventures here and about my transition to Australia here.